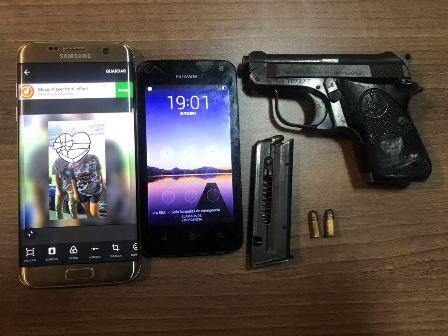 The commander of the Duran District, Crnl. Jaime Amores Carrera, reported that at 16:30 on Thursday, two minors have been isolated by personnel of the Motorized Operations Group (GOM), during a police action developed in the Via Durán-Tambo, at the height of the entrance to the third stage of El Recreo.

The minors had been observed along with two other subjects moving in the Chevrolet Aveo vehicle, black plate GSD-5876, who when noticing the police presence, have come down and left in a hurried race, being neutralized about 100 meters by the staff police of the GOM, minors under 17 and 13 years.

During the police action indicated the Crnl. Jaime Amores Carrera, the servers have heard several calls for help that came from the trunk, proceeding to open it and release the citizen Manuel P., who had been the victim of the crime of kidnapping for ransom.

The commandant of the Durán District specified that the driver, feeling liberated and protected by the police members, told that he had been working as a friendly taxi at the height of the La Primavera 2 citadel. He had picked up four people, who had asked him make a transfer to the center of Durán and that had just started the march, has been attacked and with a firearm caused a cut in the scalp and after submitting it enter the trunk.

During the police action indicated the Crnl. Amores Carrera, the youngest of 17 years of names Víctor Leonardo G. S, has been found as evidence a cal gun. 22mm, Pietro Beretta, loaded with a cartridge in its feeder and in the pocket two other cartridges.

Personnel from the National Directorate for the Protection of Children and Adolescents (Dinased) took proceedings by transferring the minors to the Adolescent Offenders Center (CAI), for flagrante delicto, being available to the prosecutor Carmen Lucciola Martínez Arauz. (Oswaldo Trujillo P. DNCE, Zone 8).