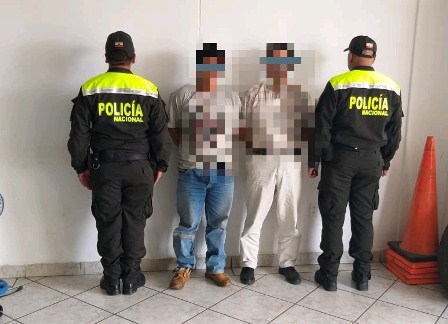 The afternoon of this Friday, March 1, in the Binational Border Service Control, 21 kilos 797 grams of marijuana, were confiscated by the Border Contingency Unit, and the apprehension of Vicente MJ, 55 years of Ecuadorian nationality and Jhon GJ ( 32), of Colombian nationality.

During a control operation, police servers with the support of the personnel of the National Customs Service of Ecuador (Senae), observed the nervous attitude of the subjects when they circulated in the vehicle, who were intercepted.

When informing the citizens of the police control and that a personal search and the vehicle would be made, Jhon GJ, who was accompanying him, proceeds to disembark from the car and go to a hasty race in the direction of the Binational Border Service Center, for what was neutralized a few meters.

Jhon G. J., wore a package of marijuana among his clothes, so when carrying out the review of the vehicle 20 more packages were found contaminated with marijuana, which allowed the apprehensions of the two people.

They were transferred to the prosecutor’s office, where the District Attorney, Dr. Ángel Montesdeoca, ruled the arrests for the alleged crime of possession of controlled substances, in this way the National Police will continue to carry out operations with the purpose of identifying people that perform acts contrary to the law. (O. Reyes DNCE)