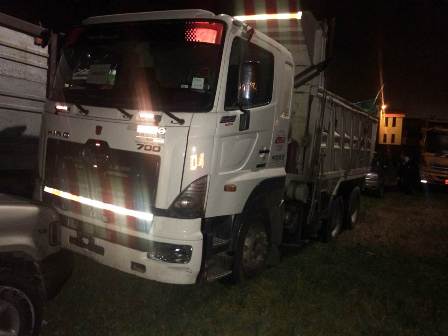 Three citizens were apprehended by police officers while performing control on the roads and access roads and exit in the sector of Palacara, Salinas parish Ibarra canton. The vehicles allegedly left Buenos Aires, parish of Urcuquí canton.

During the control patrol, the police stopped the march of two vehicles, one Chevrolet Gran Vitara brand lead plate GSJ-5885 led by Jorge A. A., accompanied by Fulvio G. R. and another dump truck type white plates ABC-8208.

When checking the dump truck platform, the soldiers observed that they had a load of rock material of different sizes and colors in bulk, as well as jute sacks with rocky material, presumably mining material. According to driver Luis S. C., the cargo he carried would be owned by the citizens who were traveling aboard the lead-colored Chevrolet vehicle.

With this information obtained, the three citizens were apprehended and placed under the orders of the respective authority for the alleged crime of illegal transportation of mining material.

Meanwhile the evidence was set, along with the vehicles was transferred with the respective chain of custody to the courtyards of the Judicial Police.

The evidences found during the control operation of mining activities consist of a volley-type vehicle of ABC-8208 plates, where the material was transported in bulk, a Chevrolet brand jeep vehicle with plates GSJ-5885, cash 12 thousand US dollars and three cell phones (Lic. P. Meneses V.-SZImbabura / DNCE)

The police take out two firearms south of Guayaquil