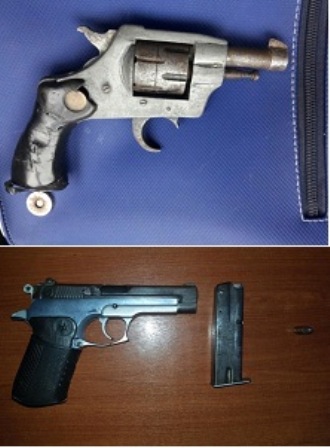 A revolver 38 caliber and a gun 9mm caliber, police servers were removed from the preventive axis of the South Trinitaria  and North Malvinas Circuits, territories of responsibility of Esteros District, Guayaquil south.

At 14:30 this Tuesday police officers of the North Trinitaria Circuit apprehended in the Fuerza de lo Pobres cooperative, Ranier Israel PA, 19 years old, who by version of residents who alerted the police, was intimidating the passers by that crossed their path.

The servers of the units Linces 4 and 5, made soon locate operation to find the whereabouts of the suspect who wore and red shirt and a black cap, being located and after making a personal search to find the firearm at the height of the Waist, being arrested and transferred to the unit of flagrante delicto and placed under orders of the Prosecutor’s office.

At 3:30 p.m. in the Las Acacias citadel, cooperative 18 de August, in a second procedure by personnel from the Malvinas North Circuit, a  gun 9mm caliber was removed from the interior of a house.

The owner of the house called the police and reported that three suspects have tried to climb the wall of their home, so it has caught their attention, noting that on top of the washing machine there was a firearm, which police members determined that it is gun 9mm caliber.

The weapons were placed in one of the warehouse of the Judicial Police of Zone 8, where they will remain under the orders of the judicial bodies (Oswaldo Trujillo, Zone 8)