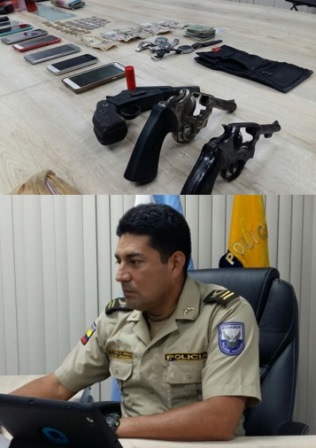 Six subjects between them, two teenagers and a woman were apprehended on Saturday night, after being found in possession of three firearms, with which they would have intimidated passengers on an urban service bus, to steal their belongings.

The Tcnl. Armando Padilla Armas, deputy commander of the Florida District, reported that at around 8:30 p.m. on Saturday they were alerted by ECU911, of a Chevrolet Aveo Family vehicle, GSR-4932, in which several individuals who had been assaulted were mobilized to passengers of an urban service bus in block 10 of Popular Bastion at the height of the sector known as “Caraguay Chiquita”, northwest of Guayaquil.

Accurate the Tcnl. Padilla, that security protocols were activated in the sector of responsibility, allowing police officers to spot the vehicle when it was traveling along Juan Tanca Marengo avenue, at the entrance to the Martha de Roldos citadel, where they were immediately neutralized.

In the Flagrancy Unit, the corresponding prosecutors, upon hearing the facts, ruled the arrests of the suspects and the isolations of the adolescents. (O. Kings DNCE-Florida District)