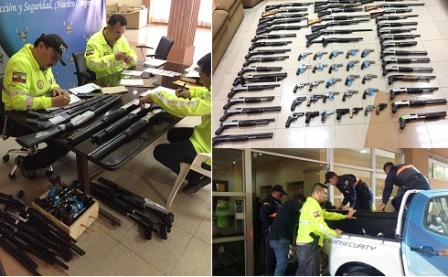 A total of 65 firearms to between shotguns, pistols and revolvers that did not have the relevant security measures, were confiscated by agents of the Department of Control of Private Security Organizations (COSP), to the company Vicused Cia, Ltda., installed in Guayaquil north

He explained that in this framework when making a registration to the armament to the company Vicused, it has found novelties in the 65 weapons for what have been removed and practiced the protocols of rigor to the Department of Arms Control of the Joint Command of the Armed Forces.

The lieutenant, Freddy Sarzosa Méndez, pointed out that the Cosp, has been making permanent controls to private security companies, comply with the rules and not have as in the case presented weapons in their rakes without complying with the rules established by law and with a good service in safeguarding citizen security and its own ages.

As a recommendation addressed to the owners of the security companies, the head of the (COSP-Zone 8), asked them to have up to date operating permits in order, that they provide an adequate service and that in the case of the handling of the armament comply with what the Law and the regulation of Surveillance and Private Security establish.

The COSP, is an organization trained to guide companies that must have all the documentation and all processes according to what is stipulated by law, so that they do not have any inconvenience, said Lieutenant Freddy Sarzosa Méndez, at the time of pointing out the serious, responsible businessman will always have all the support from the National Police (Oswaldo Trujillo P. DNCE, Zone 8)

The Police seized two firearms in operations carried out in Guayaquil