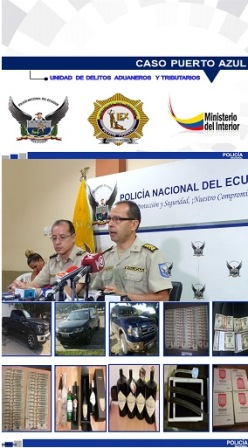 An alleged criminal gang that in illicit association committed crimes of customs fraud and caused an injury of more than 5 million dollars to the country, was dismantled at 02:00 this Tuesday in the cities of Guayaquil, Milagro and Samborondón, with the apprehension of 12 of its members.

The commander of Police, Zone 8, General. Marcelo Tobar Montenegro accompanied by the subcommander of Zone 8. Cnrl. Carlos Mera Stacey, said that agents of the Customs and Tax Crimes Unit of the National Police, in coordination with the State Prosecutor’s Office and the National Customs Service of Ecuador (SENAE) have executed the “Puerto Azul” operation with 18 raids.

The suspects, according to information provided by General Marcelo Montenegro, committed their crimes of tax fraud in the Port and Airport of Guayaquil, through illicit imports such as cigarettes, Liquors and clothing. Which were collected in different places and then distributed os introduce them illegally in different commercial stores in the country.

The organization that hat had been operating since September 2017, was seized as evidence three vehicles, a firearm. $ 70.000, documents, technological equipment, items that are entered by chain of custody in the yards and warehouses of the Judicial Police of Zone 8, indicated the police authority.

The commander of Zone 8, noted that personnel of the Customs and Tax Crimes Unit, to enforce the search warrants to comply with the arrest warrants, have had the assistance of a team of fiscal agents and tactical teams of the Group of Intervention and (Rescue), Criminalistics, SICOM and UPMA.

In one of the Transitional Assurance Rooms of Albán Borja, the detainees are awaiting the hearing to formulate charges for the crimes of Customs Fraud contemplated in Article 299 of the Comprehensive Criminal Code (COIP). (Oswaldo Trujillo P. DNCE, Zone 8).

The police institution is strengthen with 383 new sub-lieutenants