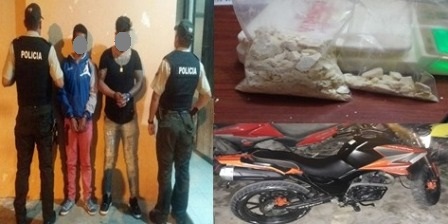 The “Interagency” operation carried out on Thursday afternoon and evening in Ibarra, ended with the detention of two Ecuadorian citizens for possession of scheduled substances subject to large-scale inspection.

The subjects were registered by the police officers who found in the possession of one of the citizens two plastic wrapping with a cream colored substance, which after the chemical analysis turned out to be cocaine with a net weight of 113 g.

The subjects were placed under the orders of the competent authority, while the motorcycle marks AXXO orange color and the illegal substance was admitted to the Antinarcotics Headquarters with the respective chain of custody, meanwhile the legal procedures are carried out.

In this operation, the circulation of around 1130 doses of cocaine was avoided (P. Meneses-SZImbabura/DNCE)

Six subjects between them two teenagers were found with three guns