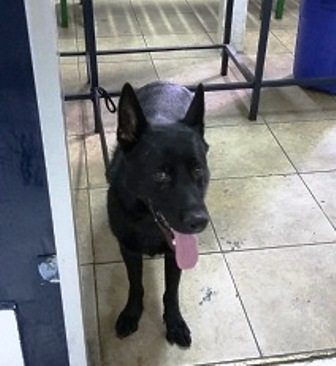 At six years and 8 months he died at the Regional Center for Canine Training (CRAC-Zone 8), the German pastor «Miso», being for his relevant services dismissed with honors nostalgia and gratitude from the staff of guides of the elite unit of the National Police.

The First Corporal of Police Cristian Lagunas Mena, who for five years and six months was linked to Miso, from the city of Ibarra, province of Imbabura, said that upon learning that the dog has died from the rupture of blood vessels and arteries and veins, he has been very sad and homesick.

Then he said that the can Miso, has reached the squad of the CRAC, from Arizona United States, which has been a very special for its characteristics of playful proactive, obedient and compliant in the work of detection of drugs such as cocaine, heroin and marijuana.

During the farewell ceremony an honor escort was formed for the passage of Miso, where the lieutenant Nelson Vinicio Orosco Sánchez, of the CRAC, indicated that «today we are saying goodbye to a loyal friend, with all the honors, for the trajectory and for the contribution provided to expose countless cases of micro trafficking and drug trafficking, we are saying goodbye to Miso, a faithful friend and companion, Miso saddens us for his departure and we will remember you in the depths of our hearts. (Oswaldo Trujillo P. DNCE Zone 8).

Recognition of police officers for relevant actions in Esmeraldas