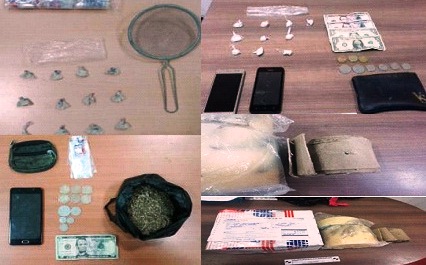 Agents of the Anti-narcotics Unit of Zone 8, in their field developed in the sector of Florida the operation «Cage», and one of control of orders in the agency of national post, located in Sauces 7, north of Guayaquil.

As a result of operatives in the operations against microtrafficking, 655 doses of controlled substances were confiscated, and three women were also apprehended and denounced by the citizens as vending machines.

On the other hand, in one of the mail cellars of the National Post Office, which are located in the Citadel Sauces 7, anti-narcotics agents in charge of carrying out the searches found a consignment consisting of a yellow cardboard that contained a soft consistency candle inside. being subjected to the field test, she tested positive for 485 grams of cocaine.

Julio Guerron San Martín, Chief of Operations of the Anti-Narcotics Unit, said that the operation «Jaula», executed in the sector of La Florida, has been developed in coordination with the Office of the Prosecutor and the collaboration of tactical teams of the Mobile Anti-narcotics Special Group (GEMA) ), preventive and investigative axis.

The three women are under orders from the Prosecutor’s Office and the seized drugs admitted to the Evidence and Evidence Collection Center of the Anti-Narcotics Unit of Zone 8. (Oswaldo Trujillo P. DNCE- Zone 8).

Course of «Rescue Trainers in Mountain» concludes to police officers

10.05 m3 of forest product retained by the UPMA