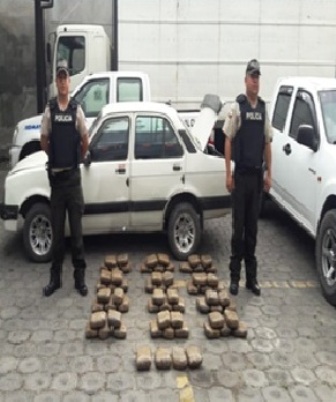 Police servers of the Border Control Unit (UCF), which carried out control on third order roads in Imbabura, intercepted a Chevrolet vehicle with plates PHN-0573, when it was traveling on the road to Pimán, El Priorato sector, Ibarra canton, giving a hard hit at micro-trafficking.

The police officers noticed that the car-like vehicle was escorted by a motorcycle and a truck, so they immediately stopped the vehicles to make the registration. In the trunk of the Chevrolet vehicle, they found 64 brick-like packages with a vegetable-colored substance of green color.

In the presence of the on-duty prosecutor and anti-narcotics agents, the substance was submitted to chemical analysis giving positive for marijuana with a net weight of 31741 grams, that is to say. 31.7 kilos of narcotics.

With the evidence found, the soldiers apprehended four citizens, two of them foreigners. Esteban Iván P., Fernando Rubén P., Germán Ramiro Y. P. and Mairon Danilo P. P. were placed under the orders of the competent authority, while the substance was transferred to the Antinarcotic Headquarters

During the control operation two vehicles, a motorcycle and 7 cellular terminals were retained. This police action prevented the circulation of around 63482 doses of marijuana. (Lic. P. Meneses V.-SZImbabura / DNCE)

Arrested for illegal possession of a firearm