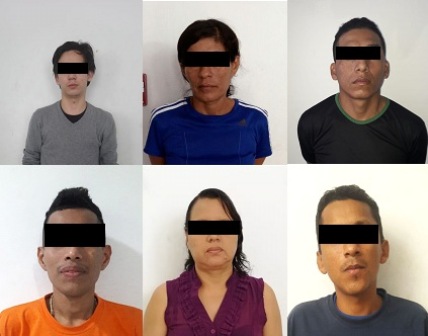 Agents of the Special Section of Location and Detention of Offenders (SEUDI), of the Judicial Police Zone 8 and of the preventive service, proceeded to locate and capture six people required by the Justice and placed at the orders of the judicial authorities.

The first case occurred in the Av. Rodríguez Bonín and Barcelona, ​​in the facilities of the Judicial Police, where the apprehensions of Violeta Iliana FB, of 38 years, Gabriel Gregorio AC, of ​​34 years, and Douglas Washington GM, of 25 years, who register capture tickets issued, were legalized. by judges from Guayaquil and Playas for crimes of drug possession, against life and robbery. The exhorted ones by justice were located in territories of the Florida Districts

Meanwhile, in the vicinity of the José Joaquín de Olmedo International Airport, the detention of Luis Reinaldo Israel R. P., aged 27, was born, in compliance with an arrest warrant issued by the Ab. Laura López Acurio, Judge of the Judicial Unit of Criminal Guarantees in Flagrant Offenses, for investigative purposes.

Continuing with the investigative work of location and capture, inside the Mall Albán Borja, was captured Silvia María G. M., 51 years old, for the crime of perjury, a ticket issued by a judge of the Court of Criminal Guarantees of Guayaquil.

While in the Urdesa citadel, on Av. Carlos Julio Arosemena and Ilanes, Joffre Giovanny V. T., required for the crime of sexual abuse, was apprehended by Ab. Gonzalo Villacreses, judge of Criminal Guarantees of Guayas.

Those apprehended were placed at the orders of the different judicial entities that issued the arrest warrants, once the legal protocols were complied with, prior to their transfer to the Zone of Deprivation of Liberty of Zone 8. (Oswaldo Trujillo, Patricio Vilema. Zone 8).