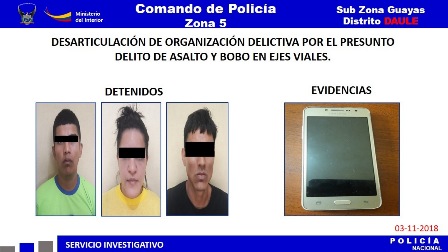 The commander of the Guayas Police Subzone No. 9, Crnl. Galo Pérez Dávila, reported that at Km. 39 of the Nobol-Lomas de Sargentillo road, at the height of the Kiosks, a supposed criminal gang dedicated to the assault and robbery of passengers who move on interprovincial buses has been dismantled.

He pointed out the Crnl. Galo Pérez Dávila, that the police procedure has been developed at 07: 3e0 on Saturday, November 3, with the apprehensions of Jairón Alexis P. N., alias 10/80, considered the leader of the organization; Luis Jonathan T. P., alias Boca Chino; and, the Venezuelan Mayeli Yulieska P. H.

In the police action they participated agents of the judicial Police and of the Subdirección of investigations of Crimes against the Property (Sidprobac-Zone 8), indicated the commander of Subzone of Police Guayas No. 9.

The detainees allegedly participated in the assaults and robberies of the passengers of the buses of the cooperatives COACTUR disco 28, aired on Friday and Piedacita. Against the three alleged criminals, the Judge Multicompetente of the Canton of Daule, at the end of the hearing to formulate charges, issued the preventive prisons and the initiation of the Fiscal Instruction for the crime of theft.

With the decision taken, the alleged members of the criminal gang with the orders of imprisonment were admitted to the Deprivation Center of Freedom of Persons in Conflict with the law (Oswaldo Trujillo P. DNCE, Zone 8).

Wildlife species were released to their habitat